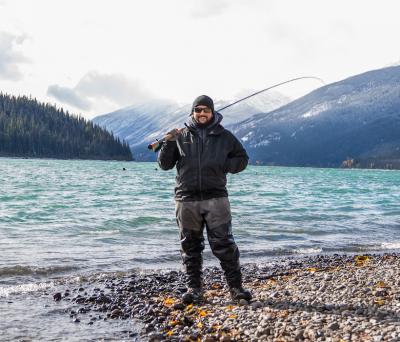 Dimitri was born a fisherman and literally popped out of the womb wearing waders and tying a fly. His dad relished in this fact; together, they spent the next 20 years fishing as hard and as often as possible. Dimitri has utilized every technique known to man to catch fish over his lifetime. Whether you are mooching up salmon in the ocean, center pinning up picky fish, or skating riffle hitched muddlers on a small stream, Dimitri will show you exactly how to do it effectively and proficiently. No fish alive is safe from Dimitri if he has a day off and is carrying a fishing rod. On the Morice, Dimitri is Mikey’s right-hand man. Together, they have elevated the fishery to a degree that is difficult to conceive. When these two great steelhead minds combined forces, they began to see patterns in the river that have yet to be discovered. Dimitri knows when an empty run will all of a sudden pack with fish. He is always one step ahead in the steelhead game. Your day with Dimitri will make you think he was a character invented by Norman Mclean in a River Runs Through It.