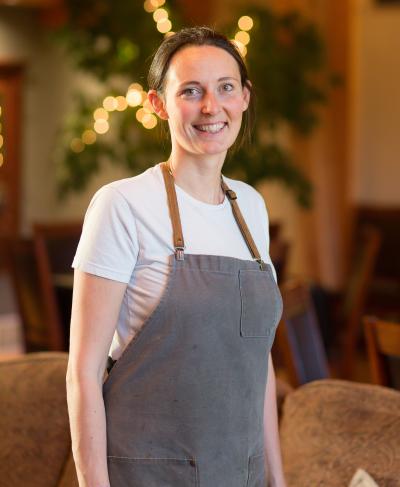 If you are looking for a role model of a strong women who juggles family and work to perfection, look no further than the talented Brandi Collins. Working her eighth year with the FSE, Brandi has elevated the food experience far beyond what guests have enjoyed at other lodges around the world. You can taste a difference in her food. It’s the one thing people talk about most frequently with our operation (even more so than the fishing). Sure, it starts by selecting the right produce and ingredients, but Brandi’s mix of chef-driven vision, passion for excellence, and a focus on perfection takes her food to the next level. Here is an article written on the talented Brandi Collins.

My first impression: Brandi Collins has a pretty sweet office.

It’s a bluebird June day, sunny but not too hot, and light streams through the wall-to-wall, floor-to-peaked-ceiling windows at Frontiers Bulkley River lodge. Outside, a breeze brushes the electric-green meadows that epitomize early summer in the Bulkley Valley. Brandi brews me up a strong coffee from the Breville espresso maker and leans a hip against the kitchen’s granite-topped island.

Tall and slim, hair swept into a casual ponytail, Brandi has an easy smile that belies the busyness of her life. All is quiet now. Her apron still clean, bins of flour and oats stacked neatly on the expansive eight-by-four-foot island. But that won’t always be the case.

It’s mid-June and Frontier Steelheads chef, with the lodge all to herself, is quietly getting ready for the season ahead. She begins by preparing, packaging and organizing meals to be delivered to two weeklong fly-in camps: six days of breakfasts, lunches, dinners, snacks, appetizers and beverages that spare none of the quality that’s served right here in the lodge.  For the record, that’s a lot of prep. She’ll spend most of June prepping the food for those two weeks of elegance in the bush, carefully arranging it into coolers and (for the first time this year) generator-run chest freezers that will be airlifted by float plane and then run by jet boat up the river to camp.

Once the meals take flight, she shifts gears to cook for a handful of guests at the lodge during July and plan for the steelhead fishing season, which starts mid-August and runs through November, when the lodge is a hive of activity as fishers awake early to head out on the river and come home to a warm fire, fantastic appies and an expansive dinner.

When there’s nothing else pressing, she’s baking and stashing snacks in the freezer for emergencies: “I basically have to be ready for anything,” she says. “I fill the freezer for whatever’s going to come at me.”

My next impression: This woman is unrattleable.

Brandi’s a west-coast girl, through and through. Growing up in Tsawwassen, she studied culinary arts at Vancouver Community College. While living in Pemberton, she worked winters at Whistler restaurants Nita Lake Lodge [www.nitalakelodge.com] and Dubh Linn Gate [whistler.dubhlinngate.com] while spending summers at Langara Fishing Lodge [www.langara.com] on Haida Gwaii. Five years ago, she started cooking at Frontier Steelhead Experience moving directly from Langara’s season on the coast to the Bulkley Valley’s steelhead season as it got rolling late summer. Today, she’s got 14 years’ cooking experience under her apron.

“Every year it gets a little busier,” she says. “Every year people start to find out about the lodge a little more.” This morning, we’re basking in the calm before the storm: Brandi’s working flexible eight-hour days, five days a week. When steelhead season starts, she’ll spend six days a week here, starting at 5 a.m. or earlier to have coffee brought to guests’ rooms and breakfast served by 6 a.m.

“My favourite time of day is 6:30 in the morning in October when that fog is rolling in, the sun is coming up, the whole place smells like coffee and everyone is in their waders. I pretty much feel like I’m the lodge mom,” she says. “Then all the trucks drive away and you’re like, hoooooo… time to make dinner!”

On those days, she takes a split shift that allows her to spend time with her son for a few hours in the afternoon before returning to have the fire stoked, appies ready and dinner on its way when the lights of the truck or hum of the helicopter announce the guests’ return after a day on the river.

Then the guests pull a stool up to the kitchen bar and share their day: “They come back and sit at the counter. Then they can watch us and chat, have a drink at the bar,” she says. “There’s always such a hustle and bustle of people coming in and out. You never know what to expect ever here.”

My lasting impression: Like the lingering scent of coffee, the lodge, even on its quietest days, exudes a sense of adventure, of contagious fun dragged back from the river like the water that clings to a pair of hip waders. At the heart of it is Brandi, the extravagant meals that fuel those adventures, and the warmth that emanates from this sunny kitchen.